Let us now go even unto Bethlehem 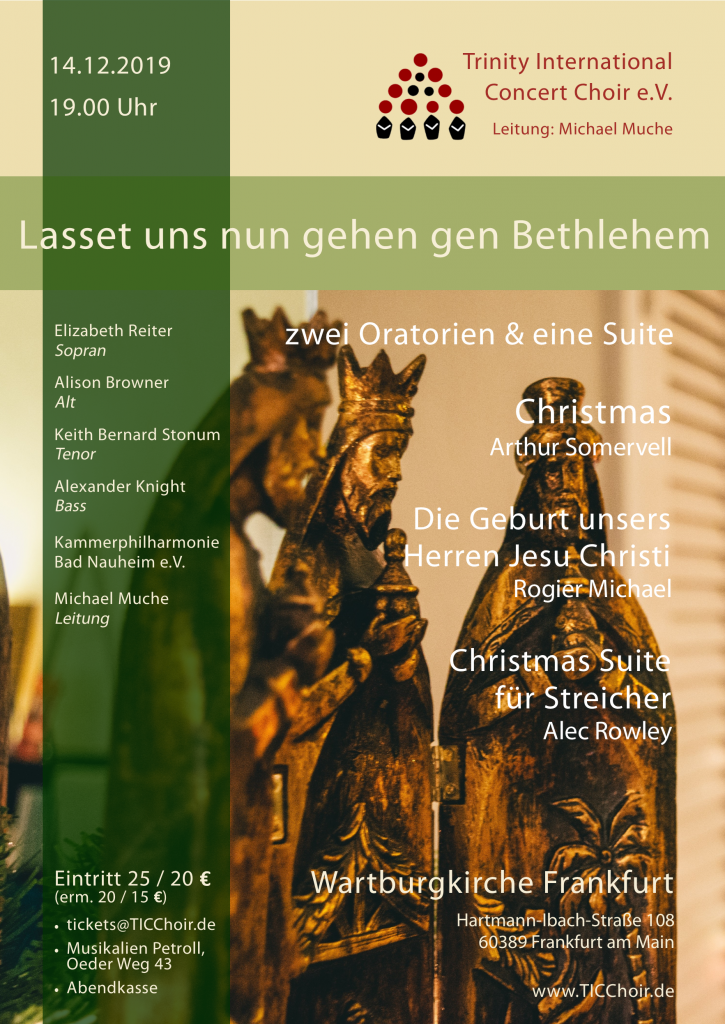 It doesn’t always have to be Bach!

A Christmas oratorio – but not by Bach! Sounds incredible but it’s true: well before and long after Bach there have been great musical interpretations of the Christmas Story. Two of these will be performed in concert by the Trinity International Concert Choir e.V. under the direction of Michael Muche on Saturday, 14 December at 19.00 in the Wartburgkirche in the Bornheim district of Frankfurt am Main.

Long before Bach, the Renaissance composer Rogier Michael produced a highly concentrated telling of the Christmas story. Only two performers suffice to tell of the events surrounding the birth of Jesus. All the dramatis personae in the story are interpreted by the choir, with the contrasting solo voice of Tenor Keith Bernard Stonum as “Historicus”, the narrator leading us through the history.

By comparison the orchestration for the evening’s highlight: the Frankfurt premier of Arthur Somervell’s “Christmas” oratorio is almost lavish. Somervell was a Briton who, like his teachers Hubert Parry and Charles Villiers Stanford, completed his music education in Germany. Like no other composer before him he successfully used familiar melodies to create a work both easily accessible to the listener and at the same time complex and multi-facetted. “O Come All Ye Faithful”, for example, is the well-known melody underlying the tonally lush and emotionally charged conclusion of the work.

These two vocal works are linked by the Christmas Suite by Alec Rowley. Rowley works several English Christmas carols into an inventive and enjoyable cycle of variations for string orchestra. Sometimes sparkling and at times meditative – they are wonderful variations on these familiar melodies.