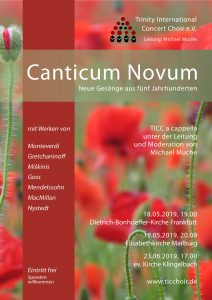 A musically broadening a cappella delight brought to you by TICC under the direction and moderation of Michael Muche.

Our program combines two things: the joys of sacred choir music and new worlds of sound!

From the very old to the very new, from the late Renaissance on into the 21st century: TICC is offering a uniquely composed program. The concert’s unifying theme is the sacred song of praise. Six representative a cappella works from Monteverdi to Mendelssohn-Bartholdy to Nystedt have been chosen for this musical stroll through the centuries. Our director has chosen the lecture recital format to provide an intellectual framework for the emotional intensity engendered by these works. The performance of each work is preceded with an entertaining introduction and illustrated by the  singing of selected passages by the choir.

The advantage of this “sung music lesson” is that in addition to getting acquainted with some relatively unknown composers the audience will gain an understanding of why many of them were regarded in their time as musical revolutionaries and historically important composers. Claudio Monteverdi (1567-1643) for example. He is the bridge between the Renaissance to the (early) Baroque era. What for his contemporaries were genuinely disquieting and daring harmonic acrobatics are perceived today as totally melodious: the comfortable familiarity of a golden oldie.

The second part of the program is designed to give the audience precisely that experience with the new or unfamiliar. The very influential Norwegian composer Knut Nystedt challenges today’s listener expectations just as Monteverdi did in his time. Nystedt, who died in 2014, marries the craftsmanship of 20th century composition with aural sensuality – instead of glaring dissonance the audience is treated to a delicious musical setting with highly inventive and surprising changes in direction. In this regard his fascinating “All the Ways of a Man” (1971) might almost be viewed as a compendium of modern compositional technique.